×
Events Directory Store Promotions About Contact Faq
EVENTS
Publika Sessions #6
...and the Publika Sessions is back but this time as a once a month 4-act affair! With hand picked acts from our roster of over a hundred musicians, be prepared for the best of the best and then some! See y'all at the show on Sep 27 at 7.30pm at The Square, Publika!

Wan Umar Shahid Wan Ibrahim (born 10 April 1990) is a Malaysian singer-songwriter, musician and composer, who performs under the stage name of Sounds Of Kites. An avid listener of folk music, experimental and post-rock, Sounds Of Kites is his amalgamation of sound ideas blending together in an effort to create the images he pictures. With soldiers of guitars behind him on stage, coupled with a baritone vocal, the songs he plays paint the audience pictures ranging from the galloping sounds of taking a ride on a steam-engined locomotive, to the soundscape that is justifiable only by drifting in a vast black sea. It was a windy afternoon out in a local park, when Wan Umar Shahid and friend stumbled upon an old man flying a kite with his grandchildren. Save for a brief moment looking up, his eyes were fixed on the children tugging and pulling on the old man’s shirt, all asking him to fly it higher. Instantly captivated by the joy, the cheers, the sounds the children made, he wanted to capture the essence of what he heard in a single phrase. Sounds Of Kites has been actively performing in the music scene around Selangor, Kuala Lumpur, Pulau Pinang, Sarawak, Johor and London since 2015, hitting up stages such as on Merdekarya, The Gaslight KL, Urbanscapes 2017, Earth Hour KL 2018, Minut Init Galeria, Grind 22, The Bee, The Canteen at China House Penang and King William IV London. Constantly revisiting musical inspirations such as Ben Howard, The Tallest Man On Earth, Richard Hawley, Natalia Lafourcade, Sigur Ros, and Godspeed You! Black Emperor, he gathers a myriad of sounds in his head and apply them on stage like lotion to flaky dry skin, with one of his originals, “The Dancer”, a fast finger-picking and folky singing tune, got him recognised as a finalist in the Taylor Guitars Acoustic Challenge in September 2016. Having collected the necessary ammunition, pebbles and experience, Sounds Of Kites began recording his debut album “Remember Sycamore” in April 2017 in Selangor, Malaysia. The album speaks of a reminder to always remember the trails and climbs done in the past, to desperately breaking away from the constraints that have chained us down, and to salute a solemn farewell to changing faces. With “Remember Sycamore” out in September 2018, Sounds Of Kites will take you on a musical journey that would make fishermen hungry for more water, and children run on fields with feet on forgotten shoes. Follow him: https://www.instagram.com/soundsofkites/

Ariff Akhir is a singer, musician, songwriter, music producer and sound engineer. As a solo act and also frontman for his band, The Sofa Sessions, Ariff has been performing live for almost 20 years. Behind the scenes, Ariff has composed, arranged, recorded, engineered and produced audio and music for local artists, advertisements, film, television, theatre and live shows. Follow him: https://www.instagram.com/ariffakhir/

Nervous Electroids is a Malaysian alternative rock act from Shah Alam formed in 2014. The outfit consists of Jiher (vocals & guitar) and Azim (guitar), who are both heavily influenced by Deftones, Foo Fighters, Alice in Chains, Grace Potter and Led Zeppelin. The band originally started off as a 4 piece band and released their debut album "Tripolar" in the year 2015. Follow them: https://www.instagram.com/nervouselectroids/

Arisha Akhir is a published spoken word poet and a storyteller. She has released 3 volumes of poetry and recently released a children’s book entitled The Girl Who Loves to Dance, a story about the importance of heritage and culture, co-published by Kakiseni and MPH Publishing. When she’s not sharing her poetry here and there and everywhere else, you can find her feeding her cat and watering her plants. Follow her: https://www.instagram.com/rirokhi/ 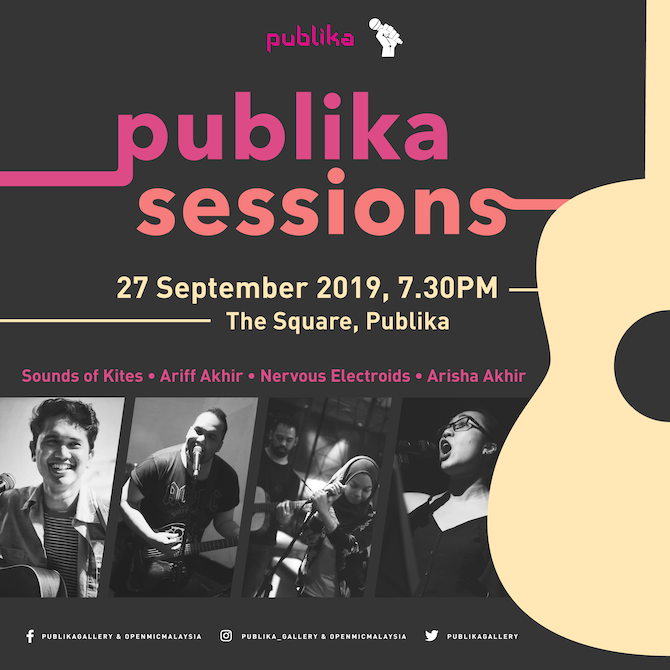