×
Events Directory Store Promotions About Contact Faq
EVENTS
Publika Sessions #5
..and the Publika Sessions is back but this time as a once a month 4-act affair! With hand picked acts from our roster of over a hundred musicians, be prepared for the best of the best and then some! See y'all at the show on Aug 16 at 7.30pm at The Square, Publika!

Known for his soul-foo vocals and big personality, Darien never fails to entertain with his contagious smile and ever-engaging stage presence. Armed with his six strings and his voice, he has improved musically by leaps and bounds since starting out just over two years ago. Darien is currently in pursuit of his first single and debut album. Follow him: https://www.instagram.com/darienfoo/ ***HELLOLUQMAN*** Music has been a part of HelloLuqman's life since he was a very young boy. Forming a deep passion for both local and international music, the young singer-songwriter found joy in singing but he never thought of turning it into a serious thing. The turning point in his life came when the movie 'Yes Man' inspired him on how one's world can be opened up to countless possibilities by only saying 'Yes'. That motivated him to pick up guitar and give it a shot by posting up his very first cover of the song Sunday Morning by Maroon 5.

Citing Brendon Urie, Ed Sheeran, and Bruno Mars as his influence. HelloLuqman has garnered more than 620,000+ views on his videos plus 3.3k+ subscribers on his YouTube Channel. He further proves himself as a force to be reckon with by winning the 2014 edition of Publika Live, beating other more established acts along the way. Follow him: https://www.instagram.com/hellolqmn/

Nazim Ifran is a indie, pop singer-songwriter from Kuala Lumpur. He began writing music at early age and drawing inspiration from various artist. In 2013, he started performing in and around Kuala Lumpur, and in 2014 released his debut single. He has since actively been promoting his music through various platforms. Follow him: https://www.instagram.com/nazimifran/

Keith Kamalaraj is a singer-songwriter who loves blues and good old fashioned rock 'n roll. He sings about life, love and loss and believes in the new Malaysia and the joy of making music from nothing. Follow him: https://www.instagram.com/keithkamalaraj/ 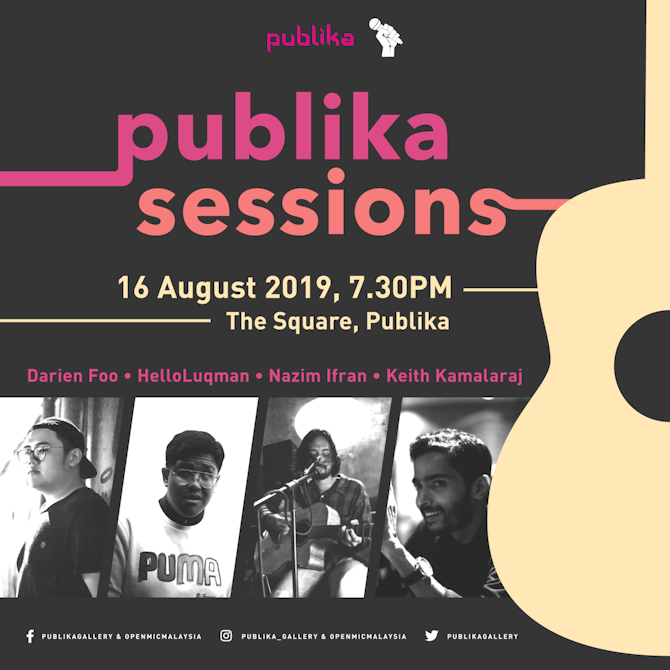